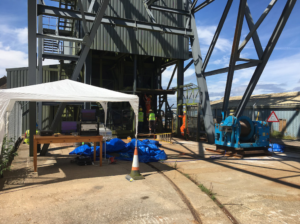 The offtake agreement covers a 10-year term and is conditional on Orion making an equity investment of no less than US$3 million in common shares of Strongbow. The synthetic aspect of the tin offtake agreement is that Orion will buy LME warrants from WUM for tin refined to LME brand specifications equal to 5% of South Crofty’s production, rather than taking direct physical delivery of the metal. The other condition of the agreement is that Strongbow completes its planned dual-listing on the AIM of the London Stock Exchange, planned by the end of 2018.

Our view: The development of the South Crofty project is currently focused on dewatering the historical mine workings, with the construction of a mine water treatment plant currently underway. Dewatering the mine is crucial as the focus of future mine development is exploitation of higher grade tin mineralisation at depth. Future drilling programmes to better define this higher grade mineralisation will also be far more cost-effective if carried out subsurface after water removal rather than drilling from ground level. The offtake agreement represents a positive endorsement of the project, though it is still likely to be a number of years until tin production could potentially recommence.