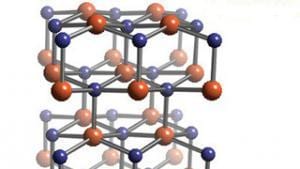 Researchers have been discovering that layers in the crystal structure of tin phosphide make it an ideal electrode for sodium-ion batteries.

Sodium ion batteries work similarly to lithium-ion batteries by using electrode materials that can absorb and store sodium atoms inside their crystal structures, holding the energy supplied by charging.  Tin phosphides can do this by absorbing the ions between its crystal atom layers, known as ‘intercalation’. Generally this is harder for sodium ions than lithium ions in lithium-ion batteries because they are larger.

Scientists at Ganghzou University in China have studied exactly how the sodium ions move into and out of the layers in tin phosphorus sulphur compounds (Sn2P2S6) concluding that this particular structure has its own internal electrical charge that attracts the sodium ions in and out of the crystal layers much faster with less damage. This means that a battery made from the material would charge faster and have a longer lifetime.

At the same time a team of Spanish and Swiss researchers have studied a similarly layered tin phosphide material (SnP), consisting of tin-phosphorous-phosphorus-tin ‘sandwiches’, showing that its performance for sodium was around double that of today’s commercial lithium-ion battery materials. The team developed a new way to make the material that is simple and effective.

< Back to Post Lithium Ion Batteries
< Back to New Technologies