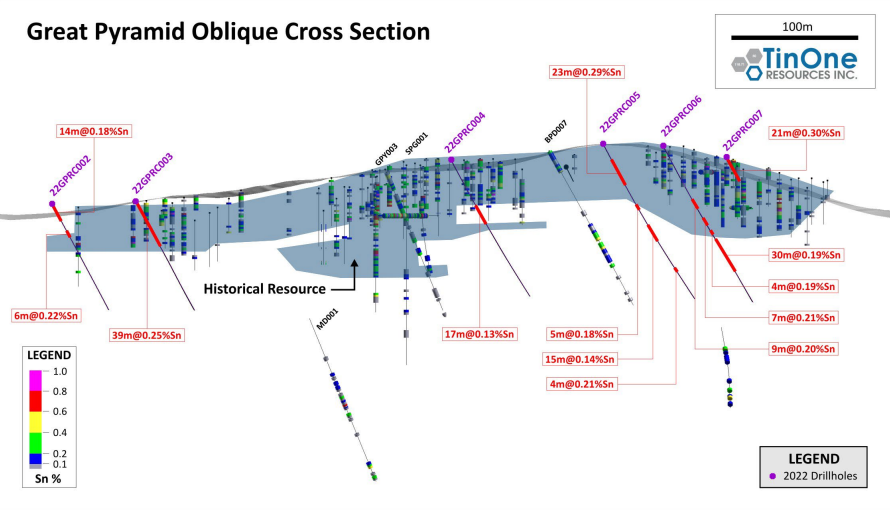 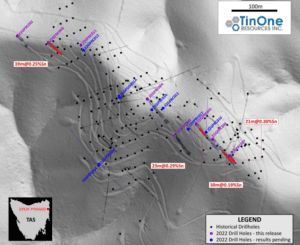 Tin mineralisation at Great Pyramid was first discovered in 1911. Some small scale mining took place, but significant exploration didn’t begin until the 1960’s. Major exploration by a number of companies, including BHP and Shell, took place until 1983. Previous owners TNT Mines drilled a single hole in 2018, bringing the total up to 199. Despite the amount of work done at Great Pyramid, the mineralisation remains open at depth and along strike. TinOne’s recent drill campaign has aimed to sure up these results, with a view of confirming the historical Inferred Resource at the project. The deposit contains some 5.2 Mt of ore at a grade of 0.2%.

The first results from this new campaign have returned broadly similar results. Key intercepts indicate 0.2-0.3% Sn over 20-30m wide intersections. Executive Chairman Chris Donaldson commented ““The results have demonstrated robust grade continuity within the historical resource at grades equal to or above historical grades.” All mineralisation was found less than 150m from surface, although some was found below the historical resource, increasing TinOne’s confidence that mineralisation continues at depth.

In addition to the reverse circulation drill holes reported in the most recent release, TinOne is waiting for assay results from over 1,100m of diamond drilling.

Our view: Although the historic resource at Great Pyramid has a number of close drill holes, the data cannot be used for a JORC-compliant Mineral Resource until TinOne confirms the data. The most recent results will add confidence that this can be achieved. The shallow nature of the current mineralisation at Great Pyramid is a key feature of the deposit.

TinOne Resources is a member of ITA’s Explorers and Developers Group.