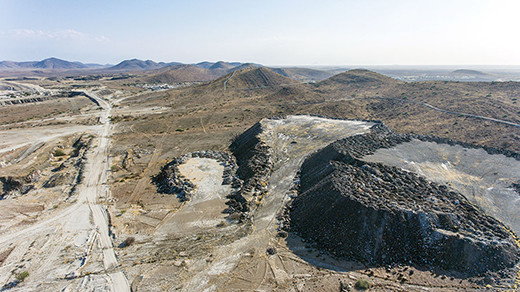 AfriTin Mining has announced its maiden JORC-compliant resource estimate at its Uis tin mine, located in Namibia. The resource totals some 72 million tonnes of ore at an average grade of 0.134% tin.

The Uis mine was a historically significant producer of tin concentrates, and was operated between 1958 and 1991 by ISCOR of South Africa. During this time, historical (non-JORC-compliant) resource information was compiled, and it was this information that prompted AfriTin to look closely at the project. In the final quarter of 2018, AfriTin began an exploratory drilling programme to validate this information, which was split into two phases.

The initial phase focused on validating the historical information, the results of which were announced in May 2019. From this work, the 141 existing drill hole datasets were able to be incorporated into the new JORC-compliant resource. While the historical drill hole datasets only estimated the tin resource, the 26 new AfriTin drill holes were analysed for by-products in order to provide further financial upside to the project. The second phase of this work, which explored the down-dip continuation of the main pegmatite ore bodies within the previously-mined area, was not included within the resource estimate due to the lack of analytical data at the time of the estimation. However, the results of this work indicate that the ore bodies remain open at depth.

The resource for the Uis totals some 71.54 million tonnes of ore, at an average grade of 0.134% for a total contained metal contents of more than 95,000 tonnes. As shown in the table at the end of the article, the majority of the contained tin is confined to the ‘Inferred’ category, indicating low confidence. While there has been significant extrapolation of the ore grades within the Mineral Resource, these extrapolation parameters were guided by the geological model, including the down-dip exploration drilling, and done in a way that is consistent with the average grade for each element within the rest of the ore body.

The Uis project began producing tin concentrates earlier this year as AfriTin decided to move ahead with a fast-start pilot-scale operation. While still ramping up to full capacity, the pilot operation can process some 500,000 tonnes of ore per annum, producing 720 tonnes of tin concentrate per year.  Following the JORC Resource, and upon reaching full-scale production for Phase 1, AfriTin plans to expand the Uis operation to process some 3 million tonnes of ore per year. The company also expects to improve tin recoveries, from 60% to 80%, allowing the mine to produce some 5,000 tonnes of tin concentrate per year.

Our view: Producing more than 5,000 tonnes of tin concentrate per year at full-scale operations, Uis has the potential to be a globally significant mine. On top of the potential for expansion based of the initial JORC resource, there is further exploration upside to the Uis project. The maiden resource is based on drilling results from the historically mined V1 and V2 pegmatite ore bodies, however, more than 100 of these geological units have been identified with AfriTin‘s mining license area.