Following its successful first ore blast at its Uis asset in Namibia, AfriTin Mining has today announced that the Phase 1 production plant will be modified to increase capacity.

The Uis mine was originally discovered by Iscor of South Africa in 1911 but was closed in 1990 due to a lack of economic feasibility. Afritin is focused on bringing what was once the largest hard-rock tin mine in the world back into production. In November 2018, exploration work began to confirm the historic SRK resource. Since then, 18 of the required 26 drill holes have been completed and logged. The core is due to be assayed and will form part of the initial JORC-compliant resource estimate.

The Phase 1 pilot plant was initially designed to process some 500,000 tonnes of concentrate annually, which is currently being stockpiled. AfriTin has now decided to implement two additional components: a third dense medium separator (DMS) section and a magnetic separation circuit. The further DMS section will concentrate the ore to a higher degree via a sink-float process to reject gangue minerals. The magnetic separation circuit will allow the company to produce tantalum concentrate alongside the primary tin product.

Our View: Although Phase 1 will be a limited-output pilot operation, AfriTin now expects its first concentrate to be produced in the second quarter of 2019 as a result of these improvements. As well as increasing the production capacity at Uis, the production of tantalum will increase the overall revenue-generation of the pilot plant. By-product revenue will help to de-risk Phase 2 of production at Uis, which aims to produce 5,000 tonnes of tin concentrate per annum. 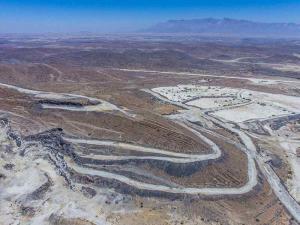 AfriTin’s full announcement can be read on their website.