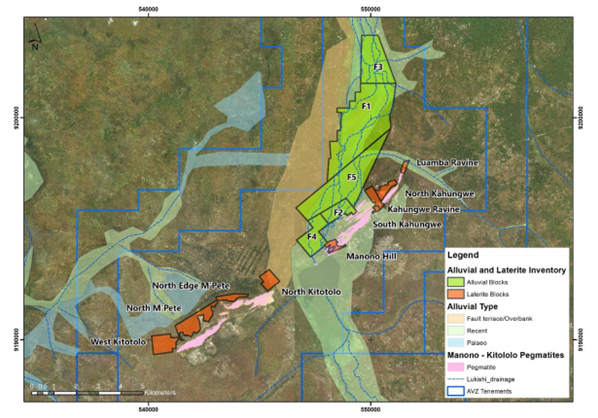 AVZ Minerals is considering a separate alluvial tin operation near to its Manono lithium-tin project.

Currently, Manono has a Mineral Resource Estimate of some 400 million tonnes ore containing some 287,600 tonnes of tin. Despite its enormous resource, AVZ’s tin is secondary to the Manono project’s massive lithium resource. However, the area has been home to tin mining for over 60 years, producing some 180,000 tonnes of cassiterite, and AVZ now believes that there is room to expand the tin side of the project.

Zaïretain, the previous operator of Manono, completed detailed exploration work between 1936 and the 1980s when the project closed. Exploration work was focused on two specific geological domains: the alluvial (bright green) and eluvial (orange) material in the areas surrounding the Manono pegmatites (pink).

While AVZ have chosen to focus on the Roche Dure pegmatite just north of Manono Hill, the area contains several other pegmatites. Over years of tropical weathering, these rocks have been broken down, forming a tin-containing laterite soil – marked in orange. This eluvial material was previously mined by Zaïretain. In 1983, the company’s mineral inventory statement (not JORC-compliant) estimated that there were some 12,724 tonnes of cassiterite remaining in the laterite.

The other domain, however, marked in green, has seen more extensive exploration work.

The Likushi River runs through the Manono area. Over the years, it has eroded material from the area’s pegmatites, bringing the tin-bearing mineral cassiterite downstream. As cassiterite quite dense, it typically drops out of river suspensions when the water moves more slowly. This concentrates it at the bottom of river channels.

Over time, the Likushi River has changed course, producing new river channels. The old channels represent high-priority targets for miners; Zaïretain carried out detailed drilling and pitting across a wide area, split into five blocks, north of the Manono pegmatites. Results indicated that course-grained cassiterite could be found in a gravel layer, which represented these palaeochannels. In total, it was estimated that the areas contained some 18,666 tonnes of cassiterite. 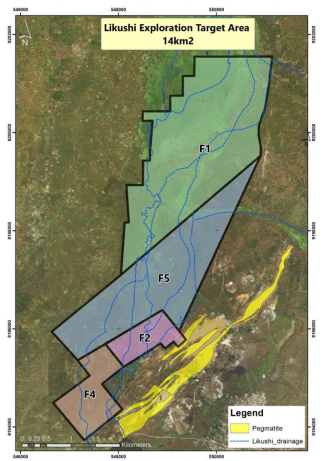 It is in this alluvial area that AVZ have defined the Exploration Target. The company believes that there could be between 1,875 and 13,500 tonnes of cassiterite within the Target Area. This does not include any of the eluvial material mentioned above and excludes one of the alluvial blocks defined by Zaïretain.

AVZ will begin work to confirm the volumes and grades in the Exploration Target during the dry season in the DRC, normally around June to August. Once this work is completed, AVZ will move immediately to a Preliminary Economic Assessment or Scoping Study for the mining of the alluvial material as a standalone mine.

Our view: While the Exploration Target looks small in comparison to the significant tin resource contained in the pegmatites at Manono, it is actually on a similar scale to other brown- and greyfield tin projects. Furthermore, there is significant upside to this target, with the laterite eluvial material likely to be added in a Mineral Resource Estimate.

Dredging, the likely technique for alluvial mining, is typically a relatively cost-effective method. The work by OCP estimated that a dredge could produce 1,000 tonnes cassiterite annually for just US$ 1.6 million per year. Assuming similar costs in 2021, this could put this project in the lowest quartile of tin projects globally. Moreover, if OCP’s CAPEX estimate of US$ 10 million holds true, this project could be one of the least expensive on a CAPEX/tonne tin basis.

AVZ Minerals are considering this alluvial project as a separate entity from the company’s existing hard-rock lithium-tin project. An economic assessment following the maiden Mineral Resource will shed more light into the feasibility of the project.