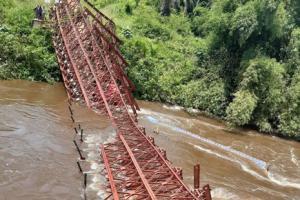 Alphamin Resources has been struck a blow in its ramp-up to full production at its Bisie mine after a key bridge collapsed along its export route.

Concentrate produced from Alphamin‘s Bisie mine is usually trucked over the Maiko Bridge at Lubutu, then to Walikale. From here, concentrates were trucked to Gerald Metals (based in Kampala, Uganda), then likely on to the port of Dar es Salaam, Tanzania or Mombasa, Kenya. However, without the key Maiko Bridge, Bisie concentrates cannot move east by road.

Before the bridge collapse, ramp-up at the Bisie mine has been going according to plan. According the company’s quarterly report (covering Q3 activities), quarterly tin production rose 269% to 2,345 tonnes contained Sn, with overall tin recovery improving to 65%. The collapse of the bridge also means that consumables used in processing and general mine operation cannot be imported – a key factor in the ramp-up of the mine, especially given the need to alter process flows and reagents to deal with higher arsenic concentrations. In its quarterly report, the company announced that current run-of-mine material contained higher-than-expected levels of the penalty element and that this was impacting tin recovery. The company expects tin production for Q4 2019 to be lower than the previous guidance range of 2,000 – 2,200 tonnes, but did not give an updated forecast.

In its quarterly report, the company announced that it was looking into alternative routes to get concentrate to port. An alternative route that Alphamin may be considering is freighting concentrate via New Kapiri Mposhi in Zambia. Roads south of North Kivu do not pass over the collapsed bridge, and once at New Kapiri Mposhi, concentrate can travel by rail through to Dar es Salaam. Other suggestions have included exporting from the west of the continent – via Walvis Bay in Namibia, currently used by AfriTin for their Uis concentrates, or Lobito in Angola -, to the south through Durban or Richards Bay in South Africa, or to Walikale by air. However, it is likely still necessary to pass through Kampala, and this presents a logistical conundrum.

The company expects repairs to the bridge to take around 8 weeks and to be completed in January 2020. Increased logistical costs, combined with higher arsenic-related smelter penalties, are likely to increase mine costs for the final quarter of the year. According to the company, this will put increase the AISC to between US$ 12,000 – 13,000/tonne contained tin, significantly below the current LME price of US$ 16,575 (11 November).

Our view: While tin production at Bisie appears to be suffering in the short-term, Alphamin expects the necessary modifications to the tin processing units – in order to deal with higher arsenic content – to be completed by the end of the year, while a move to mine areas containing lower concentrations of arsenopyrite (the mineral responsible for the arsenic content) should dilute the impact. Furthermore, the company are in advanced talks to solve the logistical problems, and it is unlikely that export delays will be considerable.