The world’s strategic stockpiles of base metals are all active in today’s metals markets after a quiet recent past. However, they have been acting differently in the tin space.

There are three major strategic reserves that are active in the tin market: the US DLA, the South Korean PPS, and the Chinese NFSRA. 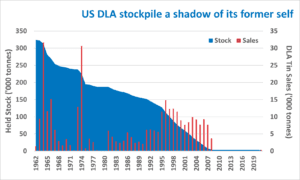 The US stockpile has fallen considerably since the 1960’s, and now sits at around 4,000 tonnes of tin.

The US Defence Logistics Agency (DLA) has the oldest stockpile of commodities in the world. Originally started in response to the outbreak of World War II, stocks were built up enormously during the Cold War. At its peak, the DLA stockpile held over 300,000 tonnes of tin, along with a wide range of other materials. However, Congress authorised the disposal of 99% of the material in 1993, leading to significant sell-offs during the late 1990s and early 2000s. Since 2008, however, no sales of DLA tin were registered, until 2021.

The Korean Public Procurement Service (PPS) acts as both a commodities trader and strategic reserve. The Service was established just after the first Korean government, in January 1949. Original the Provisional Office of Foreign Supply, its original responsibility was to manage foreign aid supply. In 1961, the Office’s scope was expanded to include domestic procurement, and in 1967, the PPS was given the task of stabilising supply, demand, and prices of major foreign raw materials. With little to no domestic tin supply, the PPS has been active in the tin market for some time.

In China, the NFSRA was originally set up to help manage the country’s food imports. The Administration now covers a wide range of commodities including base metals.

All three agencies are currently active in the tin market, but each are acting in different ways.

This year, the DLA has sold some 400 tonnes of tin into the US market. With no significant domestic tin production, consumers have struggled with delayed and uncertain deliveries from South East Asia. On top of the shipping issues, consumers have also had to pay record high premiums for the metal.

While customers were generally enthusiastic about a local source of tin – no matter how small – the metal still came with associated costs. The metal held by the DLA was originally produced at the Longhorn smelter in Texas, but, the metal had suffered significant degradation due to the long storage period. The metal will require re-melting and upgrading back to a higher quality before use.

According to sources at the DLA, the agency has reportedly sold its last parcel of tin for 2021. However in its annual plan published at the start of the year, the government agency was cleared to sell all of its stock – some 4,000 tonnes. It is likely that the DLA will continue to sell small parcels of metal in the US market if it remains stretched.

Like the American agency, the Chinese National Food and Strategic Reserves Administration (NFSRA) has been selling commodities this year.

According to top officials in the country, the rise in commodities prices will negatively impact the Chinese economy. Much of China’s economy still depends on manufacturing; if prices are too high, the industry will slow, causing the economy to stall. In a bid to keep a lid on the base metals bull market, the NSFRA has sold significant quantities of metals such as copper and aluminium. Some 170,000 tonnes of metals were sold in the second batch of sales.

However, the Reserve holds no tin, meaning that prices for the white metal have continued to rise. While the local Yunnan government did look to set up a temporary stockpile of tin in 2019, this was aimed primarily at aiding companies with financing. However, despite financing available for up to 40,000 tonnes, very little material was put into the scheme; this has all been returned as the incentives were only in place for one year.

Unlike the Chinese and Americans, however, the Korean stockpiling agency has been looking to purchase more metal.

The PPS continually purchases tin, which it distributes to smaller customers within Korea. This year, however, the government agency is looking to expand its holding of base metals, possibly including tin. While it is currently unknown how much tin the PPS holds, in 2017 it was estimated that it was storing some 2,000 tonnes of tin as a reserve.

Our view: Commodity stockpiles are generally thought of as a means of last resort to supply crucial industries, or as a way to control commodities prices. This has been the case in Korea, where many smaller companies – who may struggle to deal with large trading companies – rely on the PPS for their metal. However, the PPS is now going against popular thinking: instead of selling its stockpile to keep the highly valuable semiconductor industry running smoothly, it is purchasing more metal.

Due to its location in South East Asia, close to centres of tin production, it is likely that Korean tin consumers have not struggled to find tin as much as those in the US. However, the metal that the DLA has sold has only been a temporary relief to the market. US consumers will hope that tin supply and logistics improve throughout the rest of the year; if they don’t, the DLA may be called on again.

Although it is very active in other base metals, the Chinese central government has not typically stockpiled tin. Minor stockpiles have been established sporadically by the local governments, however. In 2009, Yunnan, Hunan, and Guangxi set up or planned to stockpile metals including tin. However, these efforts are typically small and short-lived. Given that China is almost completely self-sufficient in tin, the government does not generally need to closely manage prices – although the high prices this year could cause a re-think.