The management of the Bolivian state-owned Huanuni mine expect tin production to fall to some 6,200 tonnes in 2018, 30% below a target of 8,000 tonnes. Despite attempts to increase the average monthly production, a US$2mn deficit which was recorded by the Huanuni Mining Company in the first half of 2018 could not be overcome, according to local news sources.

Low production in the second half of the year has been attributed the depletion of the deposit and ore theft, the latter of which has had a major impact on production for the last two years. Moreover, the Huanuni mine has been struggling to maintain output due to the aging Santa Elena processing plant, which is being phased out, with trials ongoing at the new processing plant, Lucianita.

Despite completing the new Lucianita plant in late 2014, its use has been continually delayed due to issues with water and power supply, limiting output from the mine. Furthermore, the processing plant has also been impacted by a lack of tailings capacity. This, however, has been partially overcome by the construction of a new US$16mn tailings dam, which is now awaiting sufficient rainfall to fill it.

Our View: Although the Huanuni Mining Company has been struggling to get the new Lucianita processing plant operational, it is likely that this plant will be utilised within the next year. This could double the processing capacity at the mine, helping to improve performance in the years ahead. However, tin output is likely to increase by a lesser amount as only around a quarter of the tin mined is currently processed through the Santa Elena processing plant. The Huanuni mine is the larger of the two state-owned tin mines in Bolivia and produced 8,415 tonnes of tin in 2017. If the companies forecast is realised, the production of around 6,200 tonnes in 2018 would be the lowest since 2007. 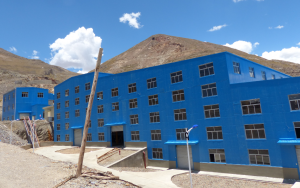