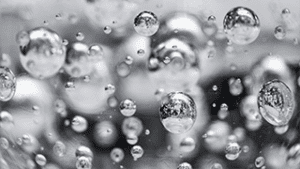 Hydrogen production using methane and molten tin has been demonstrated by a team of scientists at Samara State Technical University, Russia. The discoveries complement ongoing research into splitting methane into hydrogen gas and solid carbon or “methane pyrolysis” at MIT. The concept was pioneered by Nobel Prize winner Professor Carlo Rubbia.

Molten tin accelerates the rate of methane pyrolysis. The Samara scientists used a computer-based model to change the speed of methane flowing through the molten tin. They discovered that the gas product contained around 60% less hydrogen if methane was fed through the tin ten times faster. This was because, at high flow rates, gas bubbles rising through the tin were larger.

To overcome this conundrum, the team placed a cascade of mesh diaphragms in the reactor. The mesh split and slowed down gas bubbles moving through the tin, allowing more hydrogen to be produced.

Another issue the team solved was the build-up of black soot (solid carbon) on the surface of the molten tin. “We have developed a special device that controls the level of molten tin in the reactor and continuously removes solid carbon particles” said Andrey Pimenov, Head of the Department of Gas Processing, Hydrogen and Special Technologies.

Our view: Hydrogen will be an important part of society’s move to curb global warming. To meet net-zero emissions by 2050, IEA estimate global hydrogen use could rise from less than 90 Mt in 2020 to over 200 Mt in 2030. The share of low-carbon hydrogen could increase from 10% to 70% in the same period. The molten tin process is one of several options for hydrogen generation, with water splitting using tin another low-carbon route. Hydrogen production using tin seems poised to play a part in the battle against climate change.