Elementos, who acquired the Oropesa tin project in July 2018, announced a three-phase plan for the mine’s development on 19 February.

Oropesa, located in the Andalucia region of southern Spain, is a hard-rock tin deposit amenable to open-pit extraction methods, with the potential for further development as an underground mining operation. In Phase 1, Elementos is looking to expand the resource and optimise the processing plan in order to improve tin recoveries and reduce costs. This drilling programme will look to test the induced polarisation (IP) anomalies that were found in February. The central IP anomaly overlaps the currently defined resource, and the company are hopeful that this will result in an expanded resource.

The second phase of the Oropesa project will involve finalising the right to operate, as well as designing and engineering a large-scale tin mining operation. Phase 3 will focus on financing and construction of the mine, before finally producing the tin product.

Our View: The Oropesa project lies parallel to three other IP anomalies, which could indicate further mineralisation. Currently, the annual production potential is some 3,000 tonnes of tin-in-concentrate, but this could expand following the updated resource and any further resource expansion. Elementos is also working on updating the geological database at its Tasmanian-based Cleveland mine, where it announced what it described as a significant increase in the resource in September 2018. 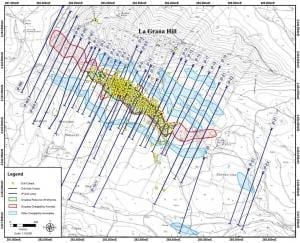 The Oropesa resource is overlapped by the central IP anomaly – a prime drilling target.