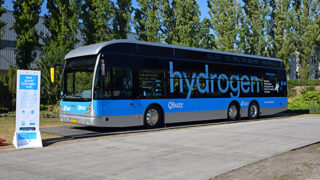 The world needs to move towards a greener future, using fewer fossil fuels. Part of that future may be powered by hydrogen but the technology to do so must be cost-effective and durable. New research highlights tin as ‘promising alternative’ for cheaper hydrogen fuel cell technology.

A multinational research team has published test results for a new tin-carbon catalyst showing that it outperforms state-of-the-art iron-carbon catalysts for low-cost hydrogen fuel cells. The development puts tin ahead in the race to find alternatives to expensive platinum catalysts used in hydrogen buses and other vehicles.

Fuel cells convert chemical energy into electricity through a pair of redox reactions. The cells require a continuous supply of fuel (such as hydrogen) and oxygen (from air) to allow this energy conversion. Hydrogen-fuel cells use high-purity hydrogen and are being developed for use in transport and stationary applications. To increase the rate of energy generation at the cathode, a catalyst material is needed. So far, platinum group metals have been shown to be the most effective cathode catalysts. However, the high cost of platinum prevents hydrogen fuel cells from being commercialised. The U.S. Department of Energy (DoE), for example, estimates that around four times less platinum is needed for hydrogen fuel cells to be a realistic alternative to internal combustion engines in vehicles. A different material could be used to eliminate high-cost platinum from these cells completely. This team of scientists found a tin-based combination that offers an excellent alternative.

The team prepared a tin-nitrogen-carbon-ammonia (SnNC-NH3) catalyst, then tested its performance against other existing nitrogen-carbon (MNC) based catalysts. They found that the tin-based catalyst had a higher power density and also rate of hydrogen conversion than a ‘state-of-the-art’ iron-based NC (FeNC-NH3) catalyst. For example, at a voltage of less than 0.7V, the SnNC-NH3 catalyst had a current density 40-50% higher than an FeNC-NH3 catalyst. The reaction pathway and characteristics also gave tin an advantage.

Despite their cost being more appropriate than platinum-group metals, the durability of MNC catalysts currently limits their commercialisation in hydrogen fuel cells. The SnNC-NH3 catalyst presented here, for example, sees 5-10% performance lost after 9,000 experiment cycles.

Our view: Hydrogen-fuel cells offer an excellent, low-carbon alternative to internal combustion engines, but some key issues remain in getting them to mass market. Firstly, the low-carbon advantage only remains if the hydrogen fuel is not sourced from fossil fuels but from renewable sources. Additionally, durability of fuel-cells must improve. The DoE has set a target for hydrogen fuel cells in vehicles of 8,000 operating hours without performance decreasing by 5%. If the SnNC-NH3 catalyst durability can be improved to meet this target, it may indeed be yet another new green technology opportunity for tin.