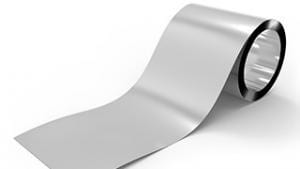 A Shenzhen energy investment company has patented a breakthrough invention using tin foil as an electrode for next generation sodium-ion batteries. Sodium-ion is widely seen as a future challenge to lithium-ion in several large-scale applications.

Shenzhen Shenke Advanced Investment Manufacturing, trading as Real Power Industrial, have demonstrated that tin foil can be used instead of conventional copper foil negative electrodes, not only because it has similar physical and electrical properties, but, unlike copper, it is also active in the sodium energy storage reaction. An important additional innovation in this case is that the tin foil product is porous, with holes punched in a regular pattern. The company claims this solves the well-known problem of expansion and contraction of the tin as sodium-ions are absorbed and released.

Simple low-cost solutions such as this are urgently needed for cheaper, scalable energy storage technologies.

< Back to Post Lithium Ion Batteries
< Back to New Technologies