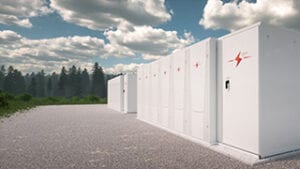 Scientists from Zhejiang University, China and the Chinese Academy of Sciences have developed a metallic tin coating for zinc anodes that increases the stability and lifetime of zinc-ion batteries. The batteries, which have a water-based electrolyte, may offer a safer, cheaper alternative to lithium-ion batteries.

The development of zinc-batteries has, however, faced some technological hurdles. Past research has identified unwanted chemical reactions in the battery electrolyte – the liquid that surrounds the battery anodes and cathodes. In some cases, hydrogen gas was released in large quantities whilst the battery was in use. These problems ultimately led to short circuits and battery failure.

To overcome these issues, the team of scientists from China have developed a method that adds a tin coating to the battery’s zinc foil anode. The tin layer reduced the battery’s rate of side reactions, meaning that, during the 500 hours of testing, no short circuits occurred. The tin-coated zinc anode was paired with a manganese-dioxide cathode to form a full cell. This zinc-ion cell was still able to store 83.1% of its maximum charge after 900 cycles of charge and discharge, demonstrating excellent cycling stability. The bare zinc anode cell, by comparison, gradually lost efficiency after 100 cycles, short circuiting after 125 hours of operation.

Our view: Lithium-ion batteries are high-energy density storage systems that are well suited to mobile applications, such as in electric vehicles. However, when the weight of a battery becomes less important and cost is more of a concern – for example in stationary, renewable energy storage – lithium-ion may begin to lose its competitive edge. As an alternative, zinc-ion batteries operate in a very similar way to lithium-ion batteries. Their manufacturing processes would be similar, meaning zinc-ion technologies could scale-up rapidly and affordably. Start-up zinc-ion battery technologists Salient Energy, for example, predict zinc-ion batteries could be up to 50% cheaper than lithium-ion. A tin anode coating offers a simple option for improving the stability and performance of this promising energy storage technology.