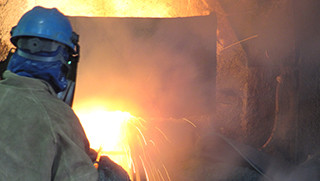 Researchers at MIT, US have shown that molten tin sulphide can be used on the large scale to capture waste heat from metals smelting plants and convert it to electricity, making operations more sustainable.

The molten material can be used inside a metal jacket around the furnace at 950-1074°C, providing an electricity supply. Typical solid state thermoelectric materials that convert heat to electricity don’t usually work at high temperatures or would cost too much for such large applications. For example bismuth telluride operates at around 500°C and costs around 150 times as much as tin sulphide per cubic meter.

The technology would enable glass or steel makers using electric are furnaces, for example, to manage the heat used, increasing productivity and plant lifetime and/or use the electricity generated to run other electrical equipment at the plant. Such producers are already familiar with handling large quantities of sulphides and similar minerals plus such sulphides have relatively low toxicity compared to some conventional thermoelectric materials containing tellurium, thallium or lead for example.

The team are working to optimise the reactor design to maximise effects of heat convection on performance.

< Back to Thermoelectric Materials