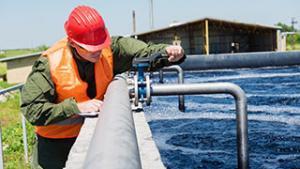 Researchers at Aqua Metrology Systems (AMS) have demonstrated that their novel electro-generated tin water treatment system could be a breakthrough in cleaning up hazardous metals from drinking water, cooling systems, industrial wastewaters and power station flue gases. The new technology is economical, simple and scalable compared to existing systems.

Cleaning up metal contaminants safely and economically is becoming a critical objective for quality of life in the modern world, with an increasing focus on pollution reduction and availability of clean water. This is reinforced by growing regulation restricting levels of metals such as chromium VI, lead and mercury in drinking water and industrial effluents. Existing technologies are typically complex systems using large quantities of expensive absorbents that then need to be disposed of. The new approach is simple, scalable and capable of a broad range of deployments.

The AMS SafeGuard H2O system releases active ‘stannous’ tin ions into the water stream from a tin metal electrode using an electric charge. The ions react with, neutralise and adsorb contaminants leaving the only consumables as tin and electricity. Eventually the tin, along with its captured metals, sticks to downstream filter surfaces where it can continue to be active in an adsorbent form.

AMS have already demonstrated that their SafeGuard H2O system can be effective in removing toxic chromium VI ions from drinking water in California, reducing levels far below those reached by more traditional technologies. The equipment is small, simple and can be up and running in a few hours. The generator is used with a media filter that builds up the tin adsorbent and reduces chromium VI content to less than 2 ppb. Dosing is controlled automatically and the tin oxide by-product can be reused.

Corrosion of lead drinking water pipes can be a major issue, as highlighted in the Flint, Michigan case where control systems failed and dangerous lead levels were released into the city water supply. Typically expensive water treatment chemicals are used but the new in-situ tin system may be more effective. Injecting the tin ions into the water utility service lines not only removes metals but also builds up a tin oxide layer on the inside of the pipes to prevent lead corrosion.

Similar mechanisms may inhibit corrosion and remove algae in the huge number of water storage and cooling systems used globally. In large-scale cooling systems such as power stations metals such as copper, iron and nickel can also be removed from the cooling water before it is discharged into the environment.

The team have designed systems for removal of arsenic from wells used for drinking water across the world, demonstrating up to 95% efficient removal in the lab. A recent study has shown that 220 million people globally may be at risk of arsenic-contaminated water.

The technology could also be applied to the pressing issue of arsenic, selenium and mercury emissions from coal-fired powers stations. Flue Gas Desulphurisation (FGD) systems scrub the plant emissions to remove sulphur dioxide. The tin system has a unique chemistry that may react with sulphur gases to recover sulphur for reuse. Hazardous metals from the coal end up in the wastewater from the FGD plant and can also be removed by tin. Latest lab results from ASM show high efficiency removal  of arsenic, selenium, lead and up to 99.9% mercury. Mercury emissions are particularly topical.

Aqua Metrology Systems is a leading UK technology company in the field of real-time water quality analysis and remediation, with operations in Silicon Valley, US.

< Back to Water Treatment
< Back to New Technologies