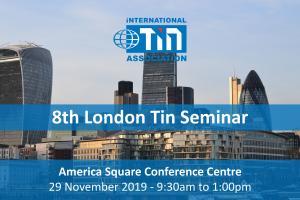 The International Tin Association (ITA) held its eighth annual London Tin Seminar on Friday 29 November. The event played host to a range of delegates, from tin producers to investors.
The global tin market may be small compared to other base metals, but it is not isolated from global macroeconomics. Sam Grant, analyst for CRU Group, set out the framework for all base metals. “Apart from nickel, LME prices aren’t heading anywhere quickly“, Sam said, referencing the general slowdown in the complex. This is due to declining global industrial production and a poor automotive sector, he concluded. In the future, Sam noted that the imminent electric vehicle transition would benefit all base metals, particularly tin.
ITA’s market analyst, James Willoughby, recapped the tin market throughout 2019. Prices were high at the beginning of the year due to constrained Indonesian supply. As this bottleneck opened around April, demand fell off, followed by the price falling to 3-year lows. Three private smelters have recently restarted production in the country, despite calls for production cuts, and exports remain high.
James also looked ahead to 2020. Prices were unlikely to rise quickly due to high idled capacity at both mines and smelters in China and Indonesia. Should demand recover – which it appears likely to do – refined tin could re-enter the market at short notice. Even if this doesn’t happen, LME and producer stocks of metal are high and could mute any price increase. However, a thin project pipeline constrains long-term supply. Although smelter capacities are increasing, questions remain over filling this capacity.
Africa used to be a major source of tin concentrates, with production peaking in the 1970’s. Yet the region now looks to be the next growth area for tin. The development of Alphamin‘s Bisie mine has paved the way for new investment on the continent.
AfriTin Mining, a Namibia-based junior, updated delegates on the progress at its Uis mine. CEO Anthony Viljoen explained the attractiveness of the project. “The current JORC resource is based on the V1 and V2 pegmatites. These are just two of the 12 existing pits at Uis, and there are over 180 pegmatites within 5 km of the processing plant. That gives you a sense of the scale of this project.” Mining began in August 2019, and the company aims to produce around 60 tonnes of tin concentrate per month during Phase 1 of development. However, the company is looking ahead and plans to increase capacity to 5,000 tonnes of tin concentrate in 2022.
Also based in Africa, Laurium Mining is hoping to begin initial small-scale production as well. The company’s main asset is in the Plateau State of Nigeria and has a long history of mining. However, prospecting ended in the 1970’s with the nationalisation of Nigeria’s mineral resources. With the central government looking to diversify its investment opportunities, Laurium hopes to make use of the existing mine infrastructure and extract tin from the alluvial and eluvial deposits. Production will begin in 2020, with the possibility of expansion not far behind.
Finally, Strongbow Exploration updated delegates on the progress made at the historic South Crofty mine in Cornwall, UK. The mine closed and was flooded in 1998, but Strongbow has now obtained the required dewatering equipment. While it was waiting, the company verified the extensive historical data and will incorporate it into an updated JORC-compliant resource. This updated resource estimate will be released with a feasibility study in Q1 2020. Owen Mihalop, COO of Strongbow Exploration, explained that there is a much bigger opportunity in Cornwall than just South Crofty. According to geological models, the majority of the historical copper mines in the region host tin at depth. However, most of this was never extracted. The mines in the United Downs area were only mined to a limited depth and so are highly prospective – the tin mineralisation was never uncovered.
For companies looking to break into the mining industry, environmental, social and governance (ESG) issues are currently the biggest challenges. However, as delegates at the London Tin Seminar heard, the ITA is championing its Code of Conduct to help investors and tin users understand these issues. “The Code is not a pass/fail audit criterion,” Stephen Taiwo, Supply Chain Standards Manager explained, “it aims to provide transparency and encourage continuous improvement.” Currently, ITA Members have reported the first iteration of the Code, and Stephen explained that the majority of the results were good. “Where companies score poorly is where they were previously not audited on these issues. This is the first time they have had to submit information on some of these topics”, Stephen said. All current and future ITA Members will report to the Code of Conduct, which will align them with the ESG expectations of investors. The aim is to roll the Code out to other tin-producing companies, and eventually other metals.
Hugo Brodie from the LME explained to companies and investors how the exchange’s updated guidance on responsible sourcing would affect the tin market. The new standards focus on four main principles: transparency, anti-discrimination, clarity and building on the existing frameworks in the sector. Hugo explained that the OECD 5-step framework forms the basis of the guidance, which has three distinct routes: route A would allow brands to use recognised, OECD-aligned standards, including the ITA initiatives of ITSCI and the Tin Code of Conduct, which would then be reviewed by the LME; routes B and C will use the existing LME red flag assessment (RFA). While very similar, route B would be audited, whereas route C would be reviewed by the LME and reports would be made public. Reporting on all three routes would begin in June 2022, and brands that did not manage to meet the standards would be unable to trade tin on the LME. 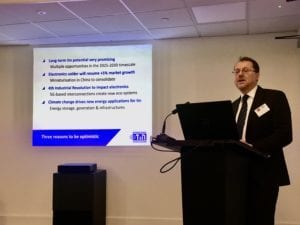 While future supply may be constrained by a thin project pipeline and increasing scrutiny along the lines of ESG, future tin demand is unlikely to be affected. In fact, Dr. Jeremy Pearce from the ITA believes that tin will likely see an explosion of new uses as the world transitions into the Fourth Industrial Revolution and embraces climate change solutions. Dr Pearce explained that tin as solder is the “glue” that connects all electronics and that the move to automation, robotics and advanced computing, supported by new 5G networks, would require much more tin. The miniaturisation of consumer electronics has hindered growth in tin demand, some of the power electronics required for new uses would need larger components and so use more tin per solder joint. In fact, research by the ITA suggests that miniaturisation is coming towards an end, with the market likely to reach parity in the 2025-2030 timescale, Dr Pearce said.
On top of demand for solder, tin may have applications in many climate change solutions, including solar panels, electric vehicles and carbon capture. Moreover, tin-containing batteries may become a major part of how the world stores renewable energy. Dr Pearce concluded by highlighting the three main reasons to be optimistic for future tin use: the end of miniaturisation, electronics growth as a result of the 4th Industrial Revolution, and climate change. The combination of all three would see tin demand increase rapidly in the 2030-2050 timescale.
The ITA’s London Tin Seminar is supported by the Explorers and Developers Group, a membership group focused on promoting exploration and investment in the tin market. More information on the Explorers and Developers Group is available on our website.
Tags:5G,AfriTin,Alphamin,Batteries,Carbon Capture,Code of Conduct,Conference,Consumption,DR Congo,Indonesia,Laurium Mining,Nigeria,Solar PV,Solders,Strongbow Exploration,Uis